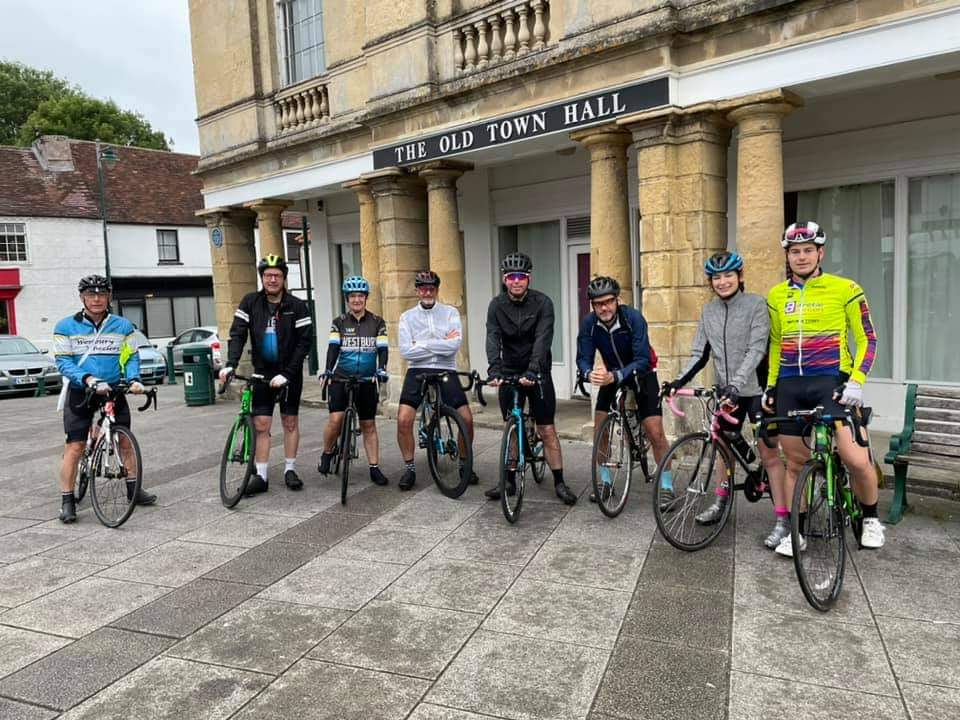 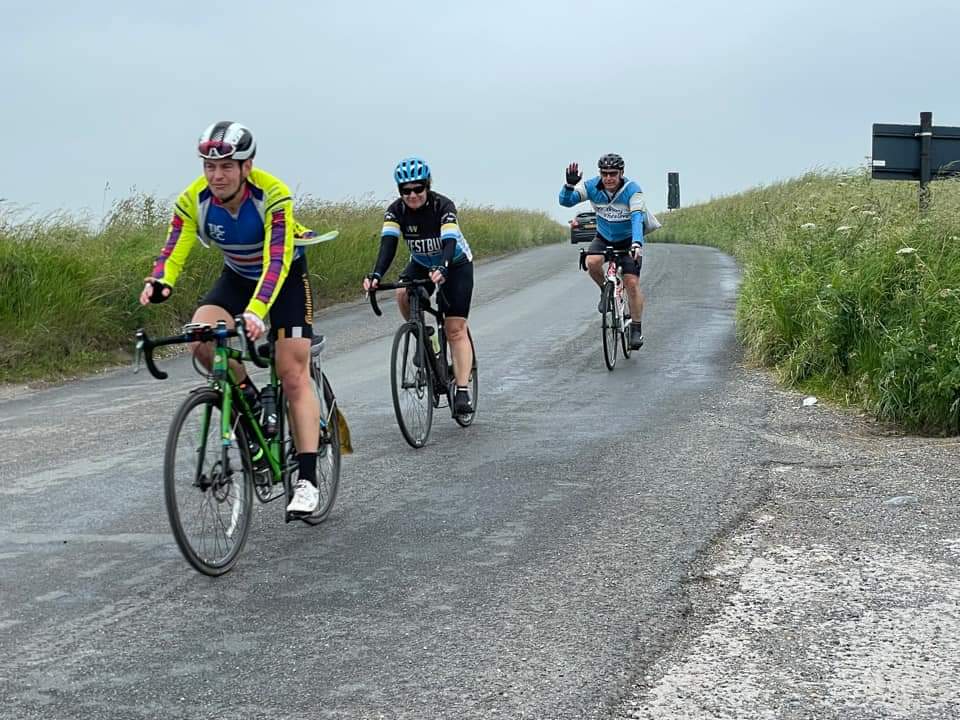 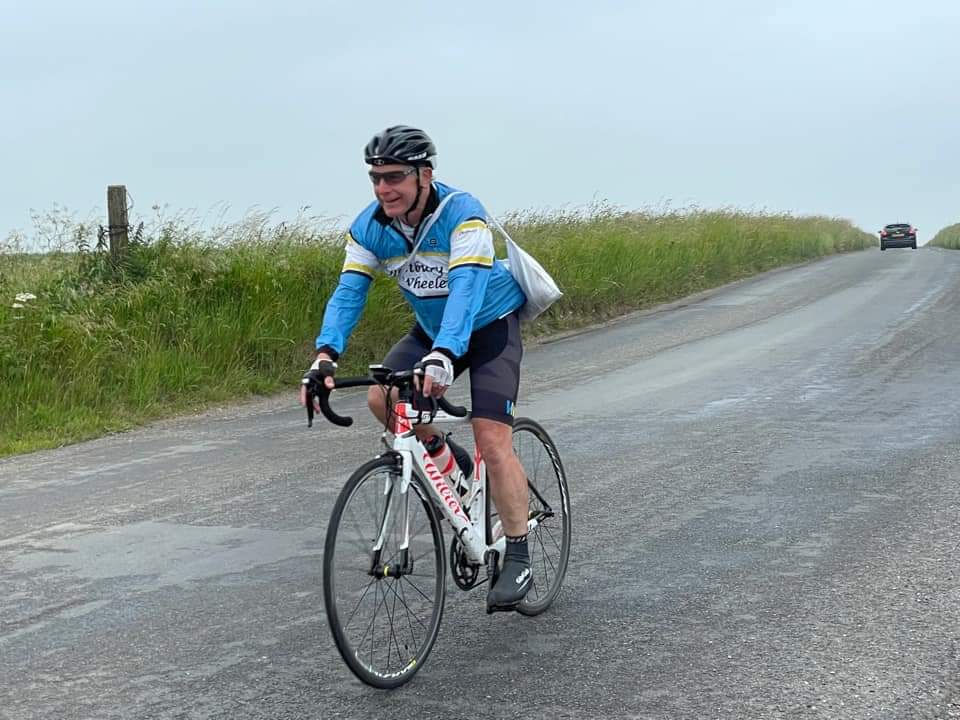 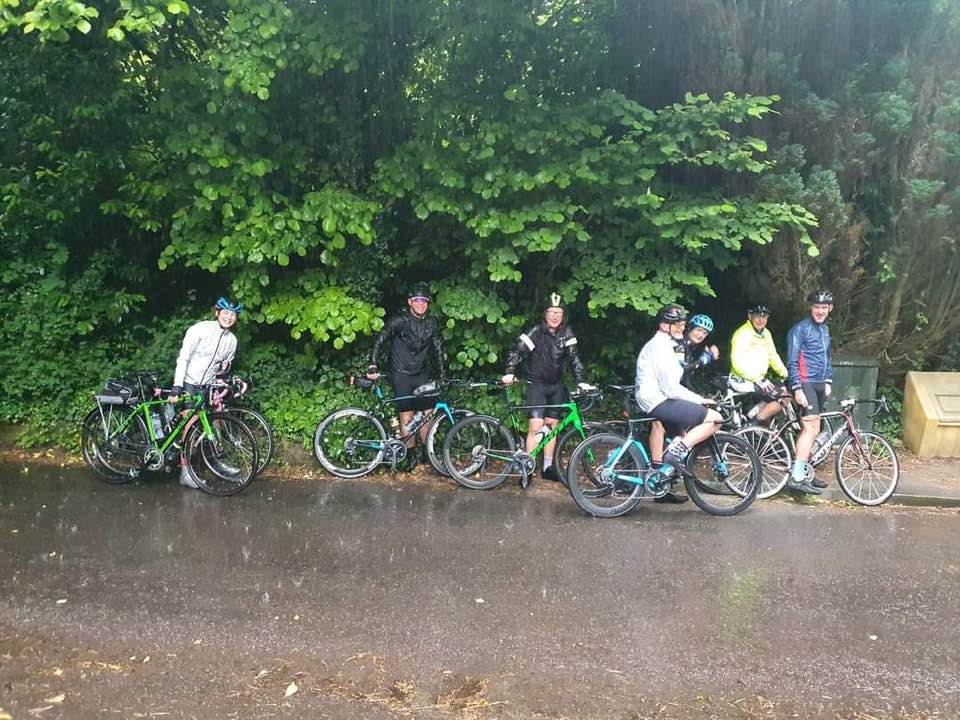 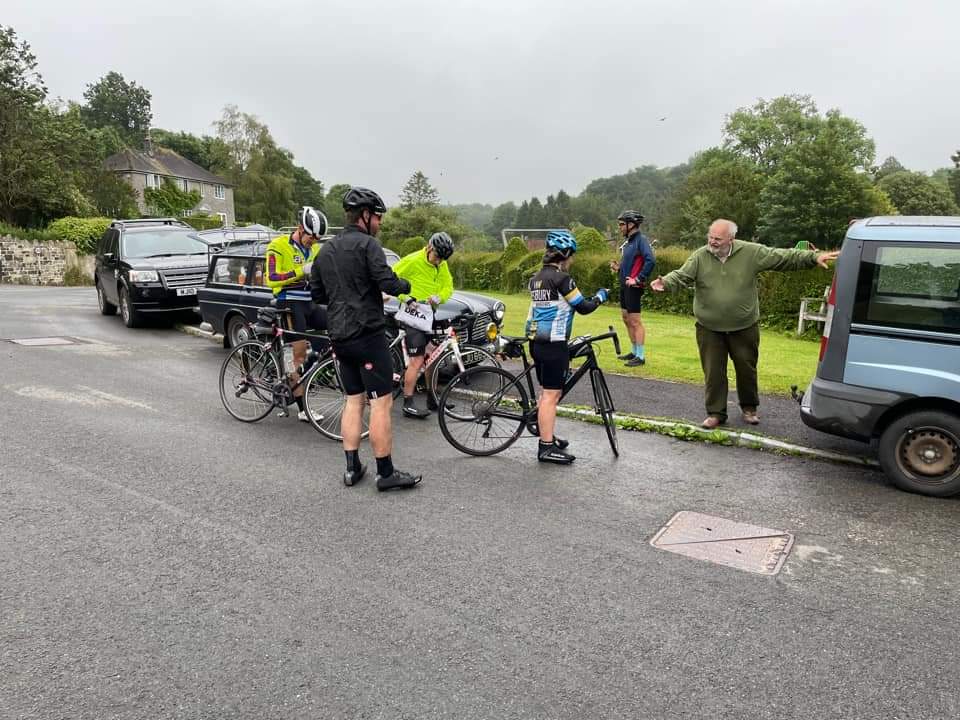 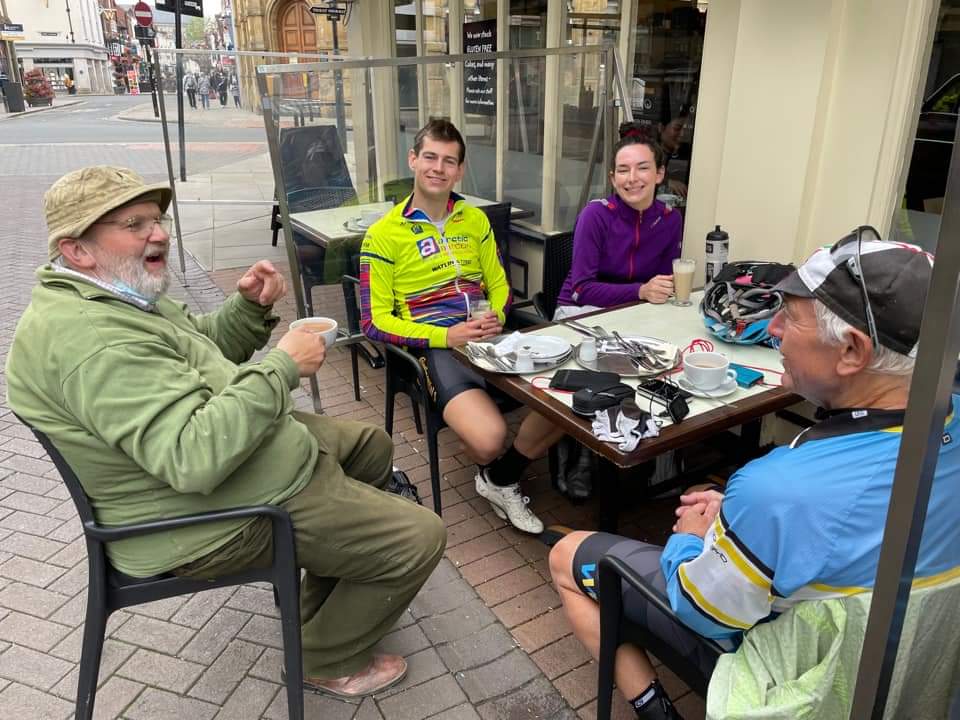 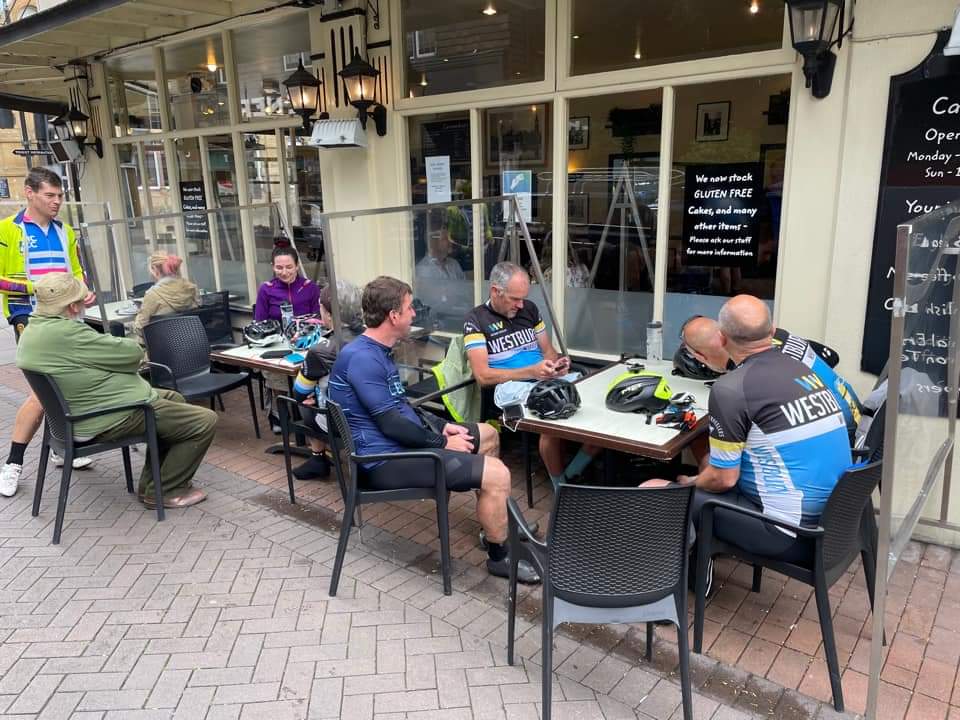 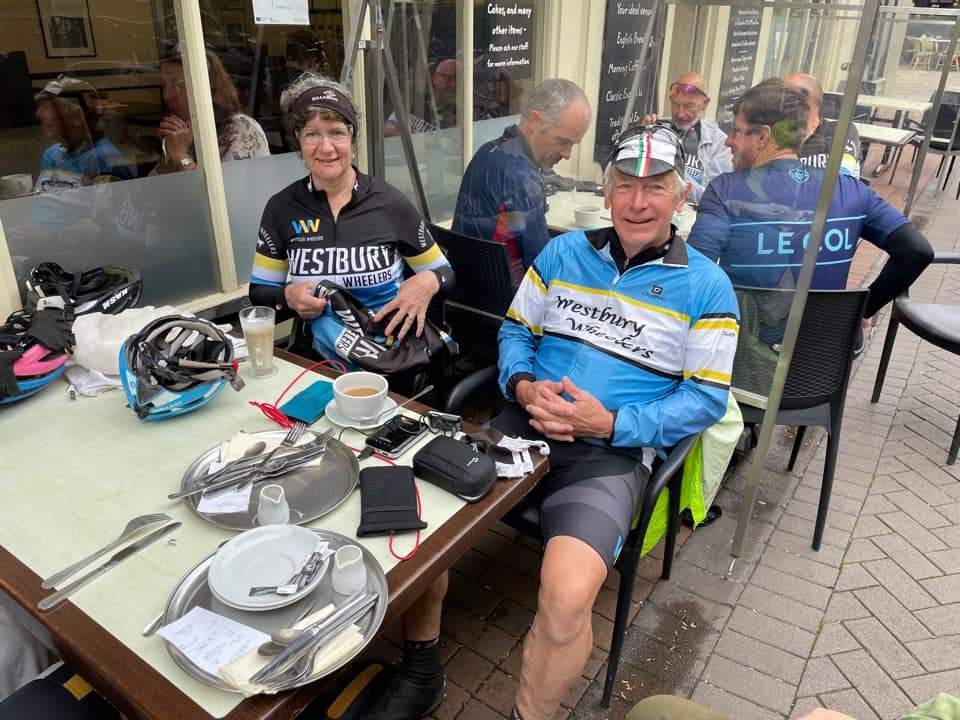 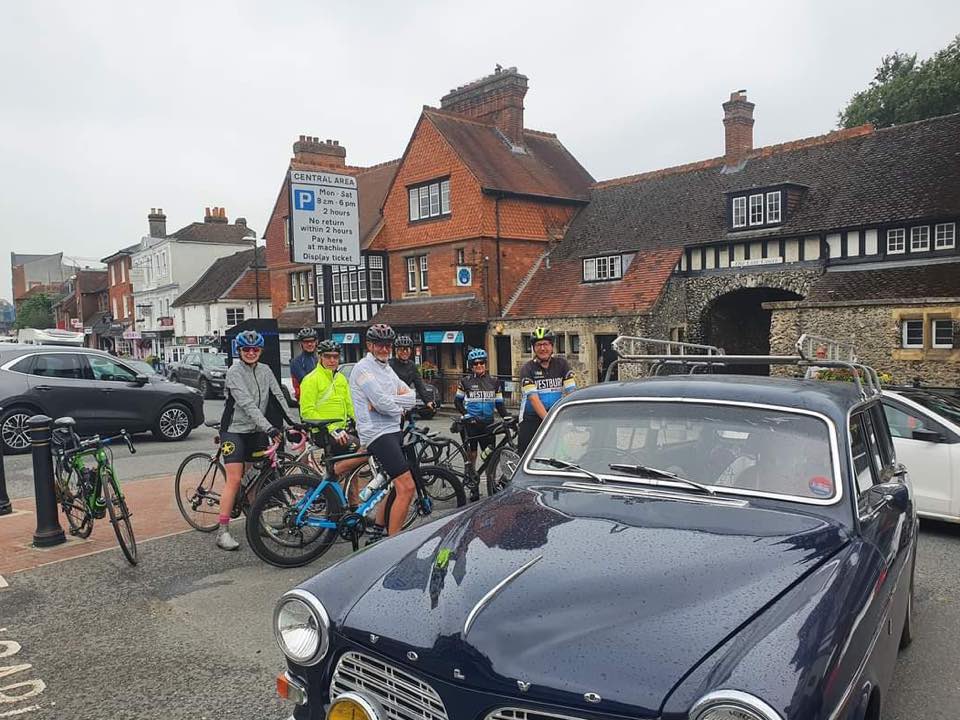 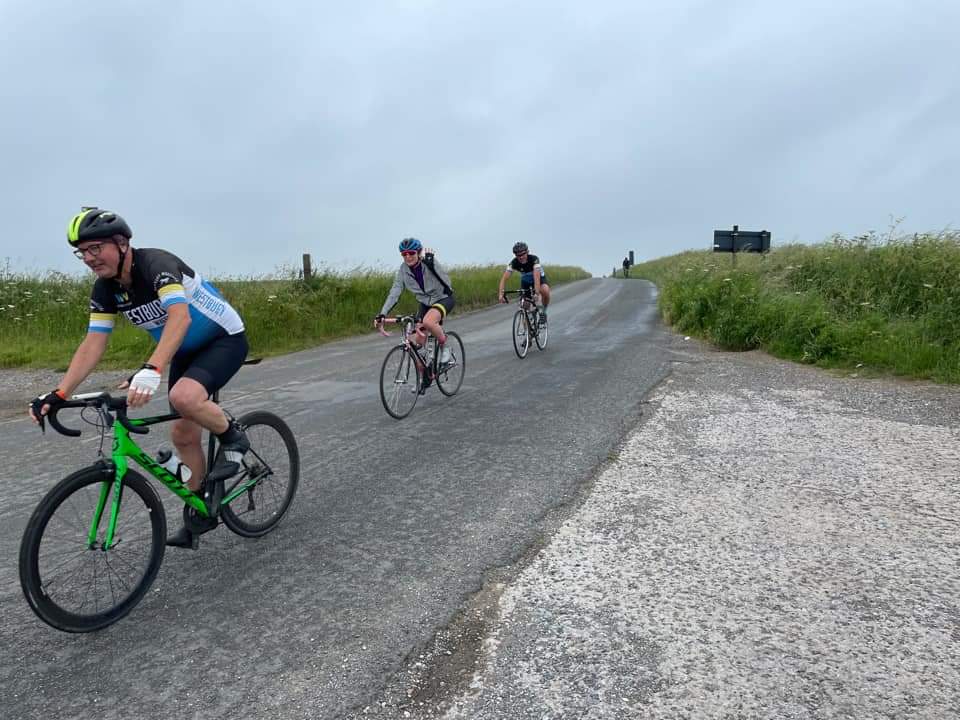 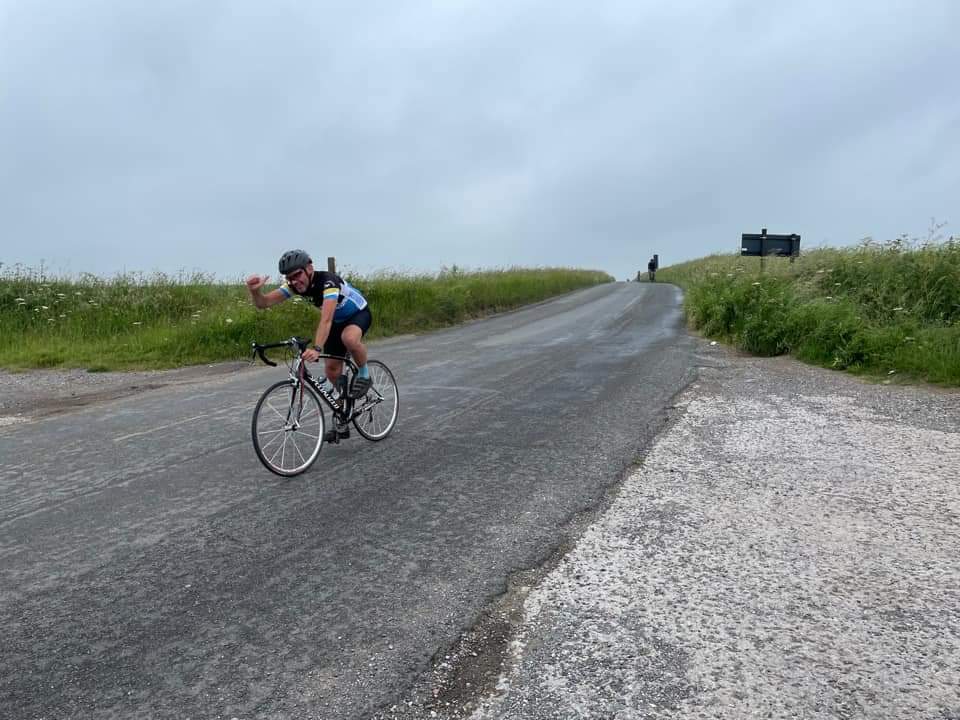 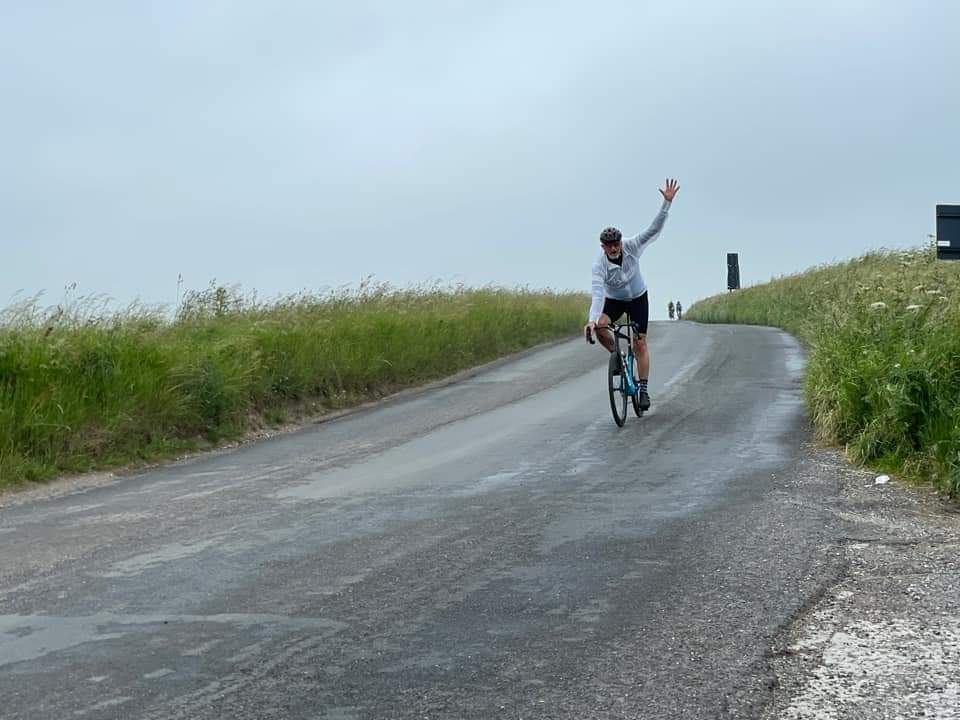 A couple of months ago I posted onto Facebook my idea of riding the Wiltshire Cycleway route and I was quite surprised there was, in fact, perhaps a dozen people as mad as me!

The route is approx. 160 miles around the edge of the county excluding Swindon.  I am not even certain Swindon is in the county, but I guess geographically it is? Anyway , as the proposed date approached we all looked at the weather and in typically British fashion the forecast was poor. The weather on the day before was better and a few riders decided to ride on the Saturday.  Most of those expressing their interest in riding the long circuit remained brave and we decided we would go, whatever nature could throw down on us.

We gathered at the Market Square in Westbury at 6am (perhaps 5 past- well I needed a bit longer in order to forget my money- oh, I owe Francis..) and the team seemed quietly….apprehensive? No, confident!.. ish.  So with the wonderful support/motivation of Peter Campbell and Francis Shephard who had woken the cockerels in order to drive the team cars to meet us, we loaded them with our spares and supplies and then agreed to crack on.

The first hill arrived before we left the Parish and as we climbed Tower Hill my fingers were crossed that this group would stay together and help each other just like professional cycle teams do, only a lot slower.  My plan had the main objective of getting everyone around and my strategy was to encourage all to ride within themselves. You know what I mean, not hurt those legs or the legs of the other cyclists, certainly not yet!

After just 4-5miles the rain was tipping down and we decided to shelter under a tree, well more of a hedge, where we discussed the situation.  There was a part of me thinking maybe this isn’t such a great idea.  I was so impressed with the attitude of everyone as it was agreed to get on with it.  After all, we had the team cars ahead.

On we rode through Longleat where Isabella decided to take a close look at the moss on a bank as she negotiated the security barrier as we exited the park.  She’s made of tough stuff and she quickly bounced back on the bike. On up to Maiden Bradley, then we avoided the route which shortens the journey to Kilmington but in return sticks holes in your tyres. We went for it with the wind helping almost “flying” down the airfield road and then I suggested not using the lane heading south of Mere (remembering Angie taking a tumble about 7 years ago and thinking the chances of a puncture being close to 100%). Through Mere  I had another bright idea (I said with fingers crossed, again)”Let’s avoid more of these dodgy lanes, in this weather it’s going to be gravel and mud all over the place!”. So we went south to the crossroads where a right takes you to Gillingham but we went left and onto East Knoyle. Everyone did well on the steep ramp approach and as we got to first meeting point we were pleased to see our support vehicles.  Dave Hodge joked I was changing into my formal evening wear as I changed my soaking socks and now put the overshoes on from the rucksack in the car…bit late to be honest. The new socks quickly absorbing the wet from my shoes at lease there was a bit of warmth. It was very nice to see Peter and Francis and it made us all feel reassured.  Peter and his military water jerry can kept us hydrated then off we went, next stage.

Allen Laker seemed very hydrated and was very interested in field gateways so far on this journey! He always quickly returned to the peloton and if anyone was separated we soon regrouped, things were going ok. After a heads up from a Saturday solo ride I avoided a bit more rough tarmac near Donhead St Something and soon we were in the Chalke Valley. We had been riding in the dry for some time and spirits were quite good. Over past the Salisbury racecourse we soon arrived in the city and to breakfast at Cowardines. We had a little delay there due to the opening rush but they were very helpful.  The sun even shone down on us for a while and the 105+ miles ahead of us didn’t seem too bad, although I didn’t mention it!

Woodfords, Amesbury, Collingborne Ducis our next rendezvous with the support team. Still no punctures, we were doing well!  Past the Wilton windmill, photo?  No, lets crack on. Froxfield, the furthest point east, across the very quiet A4, still no rain, still no punctures! Negotiating the village of Ramsbury half expecting Dad’s Army to march down the High St. then some little climbs and into Marlborough.  This is about 100 miles done, well almost.  I made a quick decision that we should dive into the empty Costa, thinking no waiting for staff to serve us and frustration as we wait for our food to be prepared.  The others reluctantly, agreed and Dan and Isabella helped the team and went off to find the support gents in the centre of the busy Marlborough High St. I was forgiven, I think and lunch was had and time was saved.  60 odd to go, now the gentle slope to the top of Hackpen Hill. The advantage of the anti-clockwise direction on the Cycleway is the avoidance of the steep sides of Clyffe Pypard and Hackpen Hills, although as I descended the former a bit too fast and tried to avoid the wet bits as I engaged the rim brakes I was questioning that advantage.

I knew the route without the need for any map so far but now I am getting to a less memorable area of the county.  Thankfully Bob had the route in his Wahoo so we didn’t get lost.  We had been heading north for ages by now and Bob and Marcus did really well spending a lot of time on the front protecting us from the wind.

A quick meeting in Malmesbury with Peter and Francis and the Volvo and the Fiat and we were all keen to get this job done. Now it’s due South the last leg, we were feeling like we might just do this. Grace still looked happy and determined, Isabella revealed that her longest previous ride was less than half of today’s route…amazing improvement. Bob looked like he could finish the remainder off at 20mph average, Dan looked like we hadn’t started yet even though he had brought his heavy winter bike and added lead under the saddle I think to reach the correct handicapping rules! Dave and Marcus just kept turning those pedals as though it was a normal group ride. Allen looked like he needed a drugs test because how does a 72 year old do this?

On down the Fosse Way with a little help from the wind on our backs, past the duck pond in Biddestone, the route told us to visit Great Chalfield Manor, photo opportunity even though we see it regularly, it’s distance from the end made it seem even more attractive.  A special photo of the only couple on the challenge, well done Dan and Isabella. Through Bradford on Avon, one last hurdle that scared me a bit, well two really.  That gravelly ramp down to the bridge at Farleigh Hungerford/castle and then the collective climbs to Tellisford! First one done no mishap. Now the hills, there was a need to stop halfway up the last bit, but no worries we all did it in the end. Rode, Rudge,  Dilton Marsh YES! back to complete the circle.  I counted 8 out and 8 back, well done Grace Shepard, Isabella McNally, Daniel Colman, Allen Laker, Dave Hodgson, Bob Waller, Marcus Rose and I make 8.  Thank you all, for a ride I will always remember.  Next year?

Posted in News
Scroll To Top